To edit or review previously created projects, do one of the following

To start modeling tool with the last project you worked on, select Options > Environment and set Open Last Project on Startup to true.

XMI 2.4 / UML 2.4 is the main file format, used by MagicDraw for storing models. This format does not specify how to store diagrams, so MagicDraw stores and opens diagram data in XMI extension sections. Thus if you use MagicDraw to open an XMI file exported from another UML tool, only the model will be opened, but not diagrams or views. Accordingly, if you open a MagicDraw file in another UML tool, diagrams or views will not be opened in that tool (unless the tool supports MagicDraw-specific file extensions). You may open more than one project within the same MagicDraw window. A separate workspace will be created for each opened project. 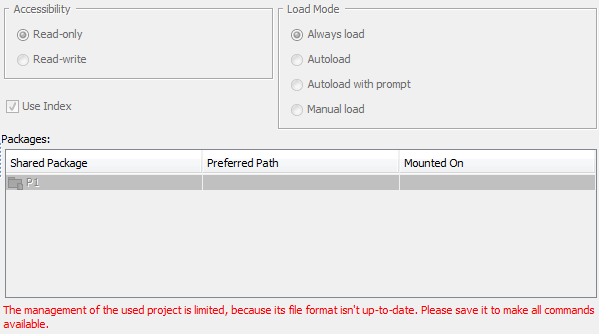 The appropriate procedure should be applied in case your model is stored in a server project with composite structure: firstly, the used projects should be migrated to Teamwork Server 17.0.1 or later, and only then the main project should be migrated.