The DataHub operations drop down has several options for copying data and you can select the operation mode of DataHub here. They are as follows: 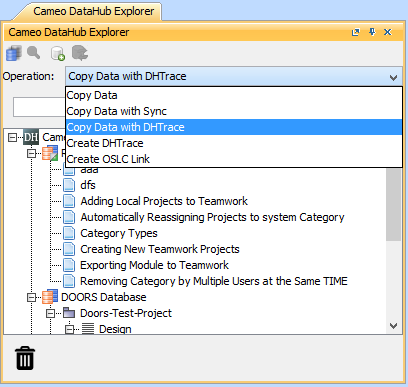 This option only copies data. It does not allow for synchronization.

This DataHub operation mode allows for copying data with synchronization. Synchronization between source and target nodes, either unidirectional or bidirectional can be accomplished in this mode.

This DataHub operation mode copies data and also includes a trace link between the source and target elements. When a node containing a trace link changes, that trace link is marked suspect. A suspect trace or DHTrace is a pre-existing or previously verified trace link that is no longer valid.

Trace links or DHTrace links can exist between text based requirements and model or design elements that define them, like use-cases, system artifacts, documents and even other requirement objects.

Once the nodes being traced are modified, deleted, or moved, you can right-click a node in either MagicDraw containment tree or DataHub Explorer and then select Check DHTrace Changes Recursively. Choosing this option will open up the DHTrace Summary dialog which lists all the suspect links in the system. You can choose to clear the suspect trace through this DHTrace Summary dialog or you can leave them as it is, in which case the requirement would be validated.

See the example on Copy Data and Create DHTrace.

You can then right-click the node in MagicDraw containment tree or DataHub Explorer and choose Check DHTrace Changes Recursively. The DHTrace Summary dialog will open allowing you to clear the trace links which have acquired a suspect status, thus validating the state of the requirement and the linked UML element.

See the example on Create DHTrace.

Typically an OSLC link is a relation between two life cycle artifacts. Relationships are modeled with two links: a forward link and a back link. They can be of the following types.