Actors represent roles played by human users, external hardware, and other subjects. An Actor does not necessarily represent a specific physical entity but merely a particular “role” of some entities that is relevant to an action performed by the Actor. Typically, such actions are called Use Cases. An Actor is represented as a “stick man” figure with the name below the figure.

You can format the actor symbol properties in the Symbol Properties dialog.

An Actor can be specified by changing its property values in the Actor Specification window. Each property is described in the description area on this window.

Actors can be represented in other diagrams, such as Sequence or Activity diagrams.

Actor usage in other diagrams

The actor can be used in other diagrams in various ways. Most common cases are as follows:

To create a Lifeline for an Actor in a Sequence diagram 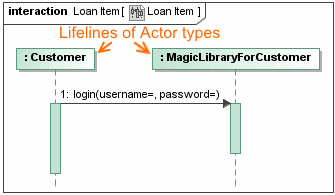 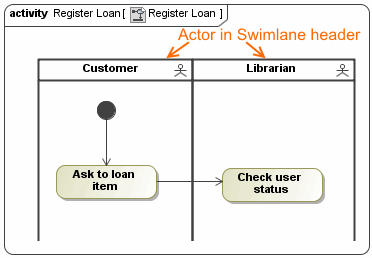 You can see the usage of Actors in the example of Use Case diagram in <MagicDraw installation directory>\samples\diagrams\use case diagram.mdzip.