Every time a project is committed, a new version of that project is created. Each project can have many historical versions. Versions can be tagged.
The number of project version is shown in the title of the client application (for example, MagicDraw or a Cameo Suite product, such as Cameo Systems Modeler) window - see the highlighted area in the following figure. 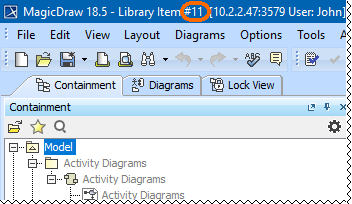 The project version number is highlighted.

Every element in the model, including diagrams, has its own history, and you can review it in any open project.

A new version of the element is created once you modify element properties, for example, update the documentation, change the multiplicity or type of the element, create a new attribute or operation. A new version of the diagram is correspondingly created after you modify its properties, for example, rearrange the diagram layout.

You can view changes in the model in a particular scope at the element level - that is a selected package or a classifier element (a composed element). The latter is a big benefit for system engineers as now you can see the history of, e. g., a selected Block, Requirement, or other composed element.

While modeling, you can analyze model history by