The used project switch impact analysis enables you to review impacting changes before switching a used project version. In other words, this tool enables early insights over version changes that would have an impact on the main project once the switch is complete. You can use the analysis to inspect impacting changes at different granularity levels, allowing you to see the impact on element-to-element usages or to dive deeper into specific affecting/affected element properties. 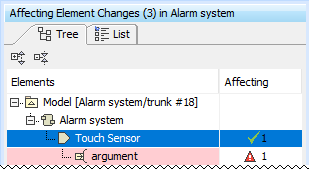 The Affecting Element Changes panel covers both direct and indirect usages, that is, if affecting change comes from an indirectly used project, it will be taken into account as well.

Derived properties are not considered in the impact analysis.

There are certain cases when element selection either in Affecting Element Changes or Affected Elements panels are not followed by a quick diff in the Element Specification panel:

All three panels have toolbars to ease navigation through changes.

Affecting Element Changes and Affected Elements panels have a List view tab. Use this to list all changed elements. You can search for a specific element in these List views.

Addition change
In the context of used project impact analysis, an addition change is treated to be the one when an element is restored from a recovered state to a normal one. Such element change is represented in the green rectangle in the Affected elements panel.

Deletion change
If an element has been removed, a deletion change occurs. The deletion change usually results in composition integrity errors, i.e., it causes the appearance of recovered elements, since the deleted element is still used in the main project.

The Accept Changes button switches the used project version to the selected one. You will be warned if the selected version will cause or leave unresolved references.

Reject Changes restores the project to the state before invoking the Impact analysis with all of the local changes you had as well. The same applies for X (closing the dialog).