Guidelines for Working with Large Models

Product performance can be highly dependent on the model organization strategy. From long-term work experience with various clients, we have selected the biggest challenges and gathered their possible solutions in one place.

Opening Teamwork Cloud project for the first time may take a bit longer, as all project-related data has to be downloaded from the server and then processed in the modeling client. The download time depends on the project size and network speed, e.g., for large projects (containing 5M/3.5M model elements in "19.0 and before/2021x and later" version), it may require downloading 1GB or more of data. Once the project is opened, we store your project data locally. The processing time depends on the downloaded project size. Opening the project for the second time is much faster as there is no need to request all data from the server again. Instead, the previously downloaded and locally stored data is reused. Only new information has to be downloaded from the server. The maximum processed data count is specified by the Recent Files List Size environment option. The processed project data is always preserved when the project is saved offline.

Frequent commits make it easier for other team members to track project changes; however, this should be avoided if many users are working on a particular project. Frequent commits create a lot of project versions and increase the commit time due to the need to update the project every time. You need to decide upon the best committing strategy within your company. A widely used practice is to commit the changes at the end of the work day; however, this should be avoided because, in some cases, the project commit may take longer than expected.

Teamwork Cloud projects are usually built from smaller parts. Different teams simultaneously develop different parts of the project, so there is a need to keep the model up-to-date. A user is notified when a new version of the used project arrives, and it is up to the user whether to apply the update or not. As not all used project version updates are important, there is no need to update the version each time a new version arrives. Therefore, it is best to set up a version update strategy within the teams. You can decide whether or not to switch to a new used project version by considering the severity of that version – the commit tags can be used to mark that the particular version contains the major changes and should be used instead.

More information can be found here.

In some cases, the project version update may take longer than expected due to a local cache update.

Used Projects Auto Update Plugin. This plugin allows users to set up specific used projects to update. We recommend that you schedule it to launch at night so that the latest versions will be ready to use the next work day. More information can be found here.

*these memory requirements are indicative and may vary by project. Strongly depends on the amount of detected changes between merged versions (in this case, the projects merge was done with 1.5k changes in total).

Since the merge operation uses a high amount of memory, please make sure that your machine is capable of performing this task. If the required memory exceeds the maximum amount of memory that can be allocated to the tool, the dedicated hardware should be used instead. In case of excessive memory usage, the merge operation can be optimized for lower memory consumption by excluding differing diagrams/elements count (Optimize for > Memory in the Merge Projects dialog); however, this optimization slows down the merge operation.

Model partitioning enables a more granular model management. Despite the benefits of granularity, project decomposition should be done carefully since managing used projects can become a bottleneck from a performance perspective. Please follow the criteria below to decompose a project:

As publishing greatly depends on the element count and diagrams complexity (e.g., diagram type, a number of elements displayed, dynamic or static content, etc.), please consider the publishing scope before publishing. Since publishing uses a high amount of memory, please make sure that your machine is capable of performing this task. Remember that if the required memory exceeds the maximum amount of memory that can be allocated to the tool, the dedicated hardware should be used instead.

If retrieving a particular element history takes a lot of time, it implies that the Content History action should be performed carefully as it retrieves the history of all contained elements at once. Before invoking this action, you should carefully consider the scope of the elements contained by the element for which the action is invoked.

If the operation that requires a remote call to Teamwork Cloud is taking too long, you can analyze a .log file to learn how much time was spent processing the operation in the client and server-side.

The latency (i.e., the time it takes for the ping signal sent from the tool to the server to return) is measured for the following operations:

The remote and local operations duration statistics are collected for the following operations:

The validation engine helps to keep the model accurate, complete, and correct. Since model checking is a complicated task that greatly depends on the project size, please consider the following recommendations to keep the modeling tool running smoothly:

Ineffectively written queries can cause showstopper problems, especially when a project becomes quite large. The most attention should be paid to Script, Find, and Find Usage in Diagrams operations. Be aware that the slow execution of queries can noticeably impact the modeling experience - some operations trigger an expression (e.g., smart packages and derived properties) recalculation.

Please find below how memory consumption increases depending on the size of a diagram/table: 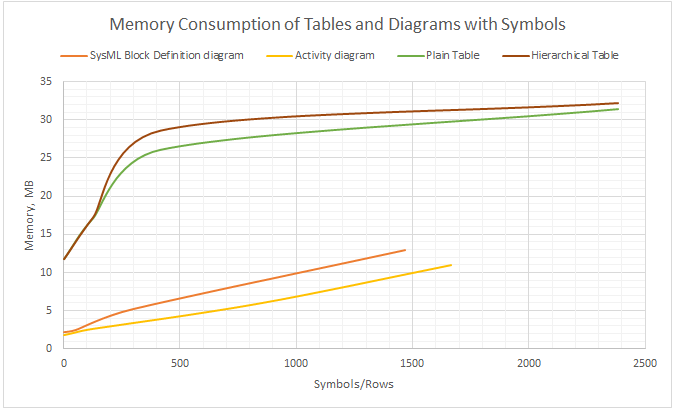 The organization of the model is determined by the package hierarchy you create to partition the elements in the model into logically cohesive groups. This affects the model browser performance as well - to avoid sluggish browsing in Containment Tree, you need to organize your model to avoid 10k and more directly owned elements by the particular element. Since containment model browser is a lazy tree, it calculates and represents the nodes during expanding the owner. The big number of owned elements can cause unexpected waiting time to complete the task. So, we recommend to split elements by creating different packages.

Since some antivirus software can cause significant performance decrease upon opening a project and performing other actions, we recommend that you exclude the MagicDraw home directory from the antivirus scanning scope.