The layout templates functionality, which is driven by <<layoutTemplate>> stereotype, assists you in creating well-formed diagrams. It allows you to define Class appearance once, and reuse it later when creating Parts typed by that Class and Ports in different diagrams. Parts and their Ports are represented identically as part's type Class whose layout and style is defined in the layout template diagram. Often, Port position reflects its physical location in the system, so it is beneficial to maintain the same appearance of Parts, layout, and style of Ports throughout the whole model. In the figure below, the appearance of the Modem Card Block is the same in two different diagrams, SysML Block Defiition diagram and SysML Internal Block diagram.

You can reuse layout templates in other projects by exporting packages to new projects. 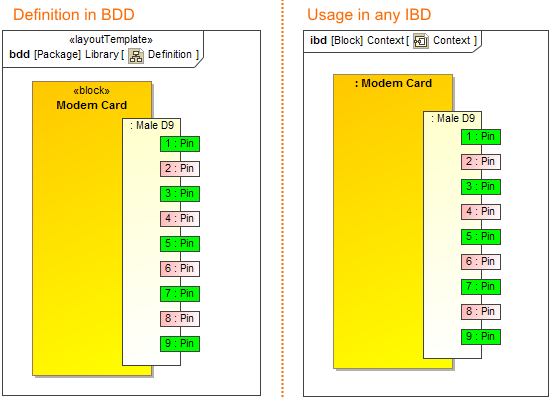 Usage of a layout template. The illustration displays concepts from SysML Plugin.

To create a layout template and use it in other diagrams, follow these steps:

Only one Class shape with its Ports can be defined in one layout template diagram.

Read the following pages to learn how to manage layout templates:

The sample models used in the figure of this page are Modem Cable that comes with SysML Plugin. To open those samples properly you need to install the SysML plugin in the MagicDraw and download Modem Cable Layout Templates.mdzip.